The AIFA Championship Bowl IV is scheduled for Sunday July 25 at First Mariner Arena in Baltimore. Over the next week I will give my situational analysis comparing these two squads leading up to this great match-up for the AIFA Title. 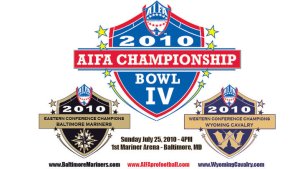 We had the pleasure of competing against this outstanding Mariners squad this year and spent time reviewing film of the Wyoming Cavalry during the 2010 season. I will attempt to deliver tremendous insight on these two talented teams leading up to next weeks game. You can look forward to breakdowns of the following key match-ups over the next week.