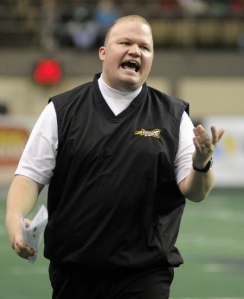 Shawn Liotta serves as the Head Coach and Director of Football Operations for the Erie Explosion.  The 2015 season will be Liotta’s ninth as a Head Coach at the professional indoor level and his sixth consecutive season in Erie. A veteran coach of over 16 seasons at the professional, collegiate, and high school level, he has earned a reputation as a consistent winner, recruiter, and promoter of professional indoor football. Liotta has served as a Head Coach at the professional indoor level over the past eight seasons including leading the Explosion to back to back CIFL Championships from (2013-2014) and an undefeated (12-0) season in 2013. Liotta has led the Explosion to a (20-2) record since joining the CIFL and from 2013-2014 Erie compiled a 15 game winning streak. Shawn holds a 76% win percentage during his tenure in Erie (58-18) and had led his teams to the playoffs in 7 out of 8 seasons as a Head Coach, while compiling a (35-5) record at the Erie Insurance Arena. Twice named league Coach of the Year, his teams have established 26 league or national records, and several of his former players have advanced to opportunities in the AFL, CFL and NFL. His teams have set scoring records in 3 different leagues including the all-time record for points scored in a single game (138) during the 2011 season. From 2011-2012 the Explosion averaged over 70 points per game and Coach Liotta has directed the top ranked offense in the league for four consecutive seasons, had 2 different first year quarterbacks named league MVP, and has coached five different players to league MVP honors. Coach Liotta has coached 5 different quarterbacks to first team All-League honors and has had 3 different quarterbacks named League MVP under his guidance. Liotta gained experience at the collegiate level at Duquesne University as the Running Backs coach from 2002-2004. During his tenure there the Dukes captured the 2002 and 2003 MAAC Championship and the 2003 NCAA Division IAA Mid-Major National Championship. In 2012 Coach Liotta authored the book “Developing and Maintaining a Successful Professional Indoor Football Program”. In 2013 Shawn Liotta was inducted into the Minor League Football Hall of Fame. Liotta is a 2002 graduate of Robert Morris University and resides in Lower Burrell, PA with his wife Allison and daughter Liliana. 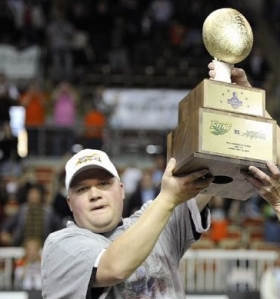 In 2013 Liotta led the Explosion to a perfect 12-0 record and the 2013 CIFL Championship.  The Explosion finished with the leagues top ranked offensive and defensive unit and Liotta was named the 2013 CIFL Coach of the Year.  The Explosion set numerous league records during the 2013 season including points scored in a single game (95), and had 10 players earn all-league honors including Defensive MVP Kwaheem Smith.  2013 marked the 3rd consecutive season that Erie finished with the leagues top overall offense with a different rookie quarterback at the helm (Adam DiMichele-2011, A.J. McKenna- 2012, Aaron Smetanka-2013).  Liotta currently serves as a member of the CIFL Competition Committee.

Liotta has twice inherited a downtrodden program and turned them into a championship contender. In 2007 the Erie Freeze finished the season with a dismal 1-13 record, the following season with Liotta and his staff in place, Erie finished with a 10-4 regular season record and a playoff berth. After leaving the franchise in 2009 to pursue another professional opportunity, Erie fell to a 3-11 record and attendance sagged to an all-time low. The 2010 season saw the return of Coach Liotta and a return to the playoffs with an 8-6 record, while bringing a high-flying offense that led the nation in passing yardage and improved attendance to the upper echelon of the league. 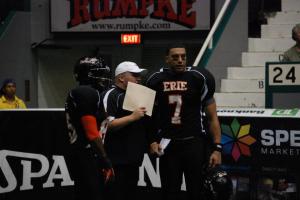 Liotta, who was named the 2012 UIFL North Coach of the Year, led the Explosion to a 9-4 record and a berth in the 2012 UIFL Northern Conference Championship Game.  The Explosion finished the season with the top scoring offense, total offense, and passing offense in the league.  Erie finished tops in the league in yards per play, first downs, and their 67.8 points per game set a new league mark.  Quarterback A.J. Mckenna had a banner season in Liotta’s offense earning 2012 Offensive Player of the Year and First Team All-League Honors.  Liotta has coached four different quarterbacks in six seasons to First Team All-League Honors; A.J. McKenna (2012), Adam DiMichele (2011), Rod Rutherford (2008), David Dinkins (2007). 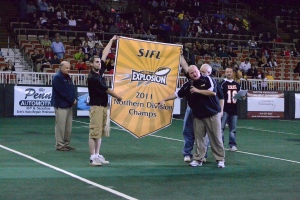 Liotta led the Explosion to the 2011 SIFL Northern Division Championship

In 2011 Erie finished with a 9-3 record, and the SIFL Northern Division Title. Explosion rookie quarterback Adam DiMichele was named the League Most Valuable Player and receiver Kevin Concepcion was awarded the League Offensive MVP award following the conclusion of the 2011 season.

The High Powered Erie Offense Averaged Over 70 points per game as Indoor Rookie Quarterback Adam DiMichele passed for 91 touchdowns and only 7 interceptions during the 12 game SIFL season.

After leading the nation in passing during the 2010 season, Erie followed those marks up by obliterating the SIFL and All-Time Record books on their way to a 9-3 record and the 2011 SIFL Northern Division Championship. During the 2011 campaign, with a rookie quarterback (Adam DiMichele) Erie would average over 70 points per game and would lead all of indoor football in touchdowns per game and touchdown passes per game. The Erie Explosion offense would finish as the top ranked passing offense in the league for the second year in a row with an astonishing 94 touchdowns and only 7 interceptions in 12 games. The Explosion shattered an all-time indoor football scoring record when they scored 138 points on the Fayetteville Force.

Rookie QB Adam DiMichele would enjoy one of the most productive seasons of all-time, as he led the league in passing touchdowns, passing yardage, and total offense. He set the league record for passing touchdowns in a game on four separate occasions with the highlight being his 12 touchdown and zero interception night in the Erie victory over divisional rival Trenton. Wide Receiver Kevin Concepcion flourished in Liotta’s pass-happy offense, finishing with 110 receptions for 1,502 yards and 47 touchdowns. Concepcions’ touchdown mark of 47 is beleived to the the most touchdowns ever scored by a receiver in professional indoor football history. DiMichele did an excellent job of spreading the ball around as 5 different receivers contributed at least 250 yards receiving to the leagues top passing attack. 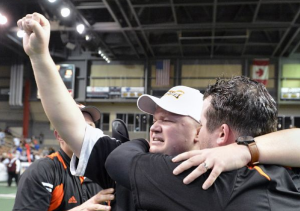 The 2010 season marked Liotta’s return to the Erie Sidelines where he led the franchise back to the playoffs. Liotta’s presence in Erie was evident as the team rebounded from a (3-11) 2009 campaign with an (8-6) finish and a 2010 AIFA Eastern Conference Playoff Birth. Liotta and his staff brought exciting high flying football back to the Tullio Arena in 2010 with the return of many of the teams former star players, and as a result the Storm featured one of the top attendance marks in the league. Liotta’s influence on the offensive side of the football was apparent as his offense ranked #1 in the League in Total Offense, #1 in the League in Passing Offense, and #1 in the League in First Downs. Prior to his arrival the team ranked last in the league (#14) in almost every offensive statistical category during the 2009 campaign. In total the team set 13 Individual Records and 9 Team Records during the 2010 campaign.

During the 2010 regular season the Erie Storm offense amassed more passing yardage than any team in professional indoor football across the country spanning four different leagues and over 50 teams. Liotta led his team to what could possibly be the greatest comeback in Indoor Football History as the Storm rallied from a 30 point deficit for a 65-58 win over the Fayetteville Guard in the final game of the 2010 campaign. His success at the Tullio Arena continued as he completed the 2010 season with a (12-3) record at home. Coach Liotta has never missed the playoffs during his tenure as a Head Coach in the AIFA leading his team to three playoff births, and currently ranks 3rd all time in regular season wins (25) in league history.

Coach Liotta Has Led His Team to the Playoffs Each Season In the AIFA, and has shown a knack for rebuilding downtrodden programs

In his first year as a professional Head Coach in 2007, Liotta led the franchise, then based in Pittsburgh, to the playoffs in its inaugural season, rebounding from an 0-3 start to finish the regular season with a 7-7 record. The highlights of the 2007 season included a convincing 62-33 win over then-defending league champion Canton, and a 86-72 victory against the Erie Freeze, where Liotta’s club set the record for most points scored in an AIFA game. Liotta was rewarded for his first-year accomplishments with his selection to head the North Division All-Star squad in the AIFA’s All-Star game played in Florence, which his team won 58-45.

Liotta\’s offensive units have been record setting, and have consistently finished in the top of most offensive categories each season

In his second year with the franchise, now relocated to Erie for 2008, Liotta led the team to a 10-4 regular-season record and a share of the Northern Division title. Erie was almost unstoppable at the Tullio Arena, winning six of seven, including the franchise’s first victory over Reading, perennially one of the AIFA’s top teams. Liotta built a talented roster including several well-known players with previous Erie indoor football connections, including OL Anthony Peluso, LB Roosevelt Benjamin, WR Darmel Whitfield, DB Sam Reynolds, PK J.R. Cipra, and Dinkins, and supplemented it with new talent such as Rutherford, DB Jovon Johnson, LB Glenroy Watkins, DL Phil Tillman, WR Eugene Baker and several others with previous NFL and Arena Football League Ties.

Liotta has coached players to school records in almost every possible offensive category in his tenures as a coach at the high school and collegiate levels. Liotta gained experience at the collegiate level at Duquesne University as an Assistant Coach/Running Backs from 2002-2004. During his tenure, Duquesne captured the 2003 NCAA Division I-AA National Championship, and the 2002 and 2003 MAAC Championships. Liotta was heavily involved in recruiting efforts and assisted with the school’s annual “Pro-Day” Combine. Liotta has served as a Varsity Head Football Coach in Pennsylvania for 5 seasons at West Shamokin and Line Mountain High School. While at Line Mountain, Liotta directed one of the top passing offenses in the entire state, and shattered most school records for the Eagles.Prior to Duquesne, Liotta served as an Assistant at Springdale High School. While at Springdale in 2002, Liotta’s offense featured the first 1,000 yard rusher in school history, and the team made the playoffs for the first time in 29 years. From 2002-2003, Liotta worked for the Metro Index Scouting Service, assisting with scouting and player evaluations for the high school, collegiate, and professional level.  In 2012 Liotta authored a book titled “Developing and Maintaining a Successful Professional Indoor Football Program”  the book is available through Amazon.

Liotta is a 2002 Graduate of Robert Morris University and resides in Lower Burrell, PA with his wife Allison and daughter Liliana.